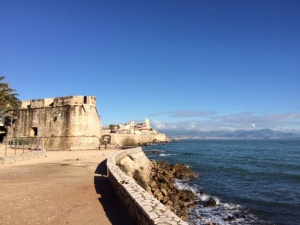 When we left off, we were headed to Cannes by bus. We realized that was a little far (better by train), so opted for Antibes instead, which is half-way. We loved it and were so proud of ourselves for finding our own way.

We took the #200 local bus, which winds through little towns and stops a LOT along the way. We did have a brief panic when we realized there were a dozen stops in Antibes – we expected just one stop with a big sign proclaiming “Antibes.” But Frank consulted with the bus driver, who let us off in what seemed like the middle of a town, but with no directions and no streets or landmarks that weren’t our guidebook. So we found a cafe to have some cappuccino and tea and re-group (and use their facilities – one of our very important strategies).

After walking in circles (just a little), we found our way and had a marvelous time. Antibes is a little smaller than the other towns (although seemed big to us), with ancient streets and little alleys that wind around with shops and cafes. There is a fort with amazing views back to Nice and to Cap Antibes (the cape of Antibes or the beach area). They also have a port with some very large yachts – bigger than Capri even!

We found their open-air market, which is set up until noon every day, featuring mounds and mounds of olives. We even tried socca, which was on my “to do” list. It is a chickpea pancake that is typcial street food in this area – imported from North Africa. They make it in a wood-burning oven right there, and people line up to buy it as fast as they make it. We bought one for the group and all tasted. Yummy!

We settled down for a real lunch at the Brasserie Clemenceau in a square with a fountain and had 2 pichets (little pitchers) of local red wine and crepes with various savory fillings, like seafood and grilled local vegetables. Magnifique!

We ended the afternoon at the Picasso Museum, which is housed in a chateau that used to belong to the Grimaldi Family (who now rule Monaco) and where Picasso spent a few years painting. Some of his happiest times were supposedly here, with his paintings reflecting the simple foods and joys of Riviera life.

Finally, it was time to venture home, but we had no idea where to go for the bus. We have learned that bus stops are only good for one way – there is supposed to be a corresponding bus stop for the other direction. However, they can be blocks apart. So we wandered the town looking at all the bus stops until we found one that listed Nice – not the most efficient strategy, but thorough. We made it and were happy to see our home street – the Promenade des Anglais. (We live on a very well-known street – kind of like Pennsylvania Avenue – so lots of signs point to it, luckily for us!) 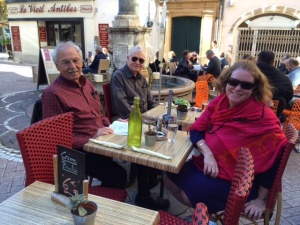 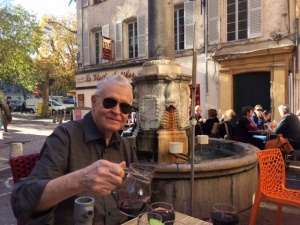