We are back onboard the Queen Mary 2, ready to sail back home for Christmas. But on our way to the ship, we were able to do a little sightseeing in Southern England.

First of all, I have to put in a good word for our driver. While we were extra proud of ourselves for navigating the train and bus system in France, sometimes it pays just to have someone pick you up – especially with all of our luggage. While I knew this would be ideal, I thought it would be too expensive. But I found a company through the Rick Steves guide that was reasonable and would do exactly what we needed.

Neil from Celtic Horizons picked us up at Heathrow (with a card with our name on it even!), loaded all our (many) bags, and drove us right to our door in Bath. Then, two days later, he picked us up, took us sightseeing, and dropped us at the gangplank of the ship. All accompanied with funny stories and commentary along the way. If you are in this area, we highly recommend him.

And what a sight we saw – the mysterious Stonehenge. No one knows exactly how it came to be, but we do know it was built about 3000 years BC, and it would have been extremely difficult to drag the heavy boulders to the site and lift them. So it must have been very important to the people of the time to have put so much effort into it. Also, it was aligned exactly to match up with the sunrise of the annual winter solstice. So these ancient settlers had to have observed that once a year, there is the shortest day and record exactly where the sun rose on that day in order to then build a giant boulder marking the spot, with the sun then streaming through a “doorway” of rocks precisely on the line where the sun rises only one day each year. Amazing. Archeologists have discovered artifacts of daily life, such as cooking utensils all around Stonehenge, but none inside, which suggests it was a sacred spot.

We were very fortunate because we understand it can be very crowded there, and the site isn’t that large. But since we were there on a damp December day, we shared the experience with about a dozen others so really could get the feel of the place. We were mesmerized.

Now we are exhausted from all the travel, Bath tours, and sightseeing, so ready for a rest onboard the ship. More news later . . . . 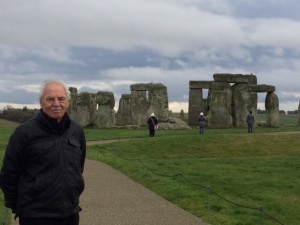