You are probably wondering why I took a picture of the sidewalk – if you look closely, you will see a face.  And it is the face of a famous Florentine author who was the center of our sightseeing today – Alighieri Dante.

We became real tourists and took the “Inferno” tour – based on the bestselling book by Dan Brown (which they are turning into a movie starring Tom Hanks).  We had read it a couple of years ago and thought would be a good way to see a number of sites.  It was fabulous!  What a fun way to learn history. Our guide started at the beginning and told us the actual story, weaving in the real history of the place as well. [By the way, the company we used was Florencetown, and I would highly recommend.] 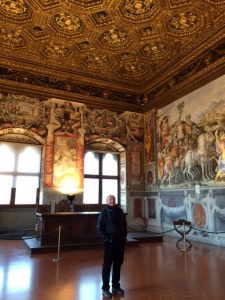 If you have read the book, you remember that Robert Langdon starts his run through Florence through the Boboli Gardens and across the Vasari Corridor (which we saw earlier in the week). So this tour picked up at his next stop – the Palazzo Vecchio. This was the home to the Medicis before Pitti Place. It had never looked especially interesting to me from the outside – but boy was I wrong. It was breathtaking inside.

The Palace includes amazing reception rooms with original frescoes and sculpture, the apartments of the Medici family, and even secret passageways. We got to see some of the highlights from the Dan Brown book, including the Hall of 500 and the death mask of Dante – kind of spooky. We also toured the Map Room, which has secret doors behind some of the maps and was where the hero of the book escaped. 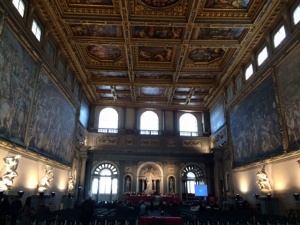 My favorite story (in real life – not from the book) – the Council of Florence selected Leonardo di Vinci to paint a fresco in the Hall of 500 (see very big room above).  He used a new technique, mixing paint with wax to make it shinier. unfortunately, the paint eventually melted.

So, about 50 years later, the Medici family hired another artist – Giorgio Vasari (of Corridor fame) to paint over it. He hated to paint over Da Vinci, even if it was unrecognizable, so he built a wall over the original wall, leaving less an inch of space, and painted his own fresco on the new wall (painting on right above). As you can see, the painting is huge and depicts a battle scene. On a battle flag near the top, too small to see from the floor, are letters Cerce Trove – in Italian – Seek and Find. Well, no one knew anything about Leonardo or why Vasari would have painted that message until only a couple of years ago. National Geographic was studying the Vasari painting and noticed little holes in it. They realized there was a fake wall, so they sent a probe into the space between the walls and discovered the Leonardo painting. So the meaning of Vasari’s secret message about what was hidden behind the wall was left undiscovered for over nearly 500 years!

Next, we went to the church where Dante worshipped.  In the book, Robert Langdon goes there to try to find a copy of Dante’s “Divine Comedy.” This is the church where Dante first fell in love with Beatrice, whom he loved all his life, even though they were both married. Beatrice is supposedly buried there and there is a basket where people leave letters to her full of their own lost love stories, hoping Beatrice may intervene.

Finally, we made our way to the Baptistery and Duomo, which are in our neck of the woods and we can see from our apartment. These are amazing buildings both inside and out – full of intricate marble, mosaics, and frescoes.  The domes are my favorite part – on the left is the Baptistery and the right the Duomo of the big cathedral.  These were important in the book because they depict the judgment of Christ – where some make it to Heaven and some to the many layers of the alternative, as Dante wrote about in his “Divine Comedy.”

We are touring the Duomo next week – you can even climb to the top – 463 steps!  You’ll have to check back to see if we make it.

Thus was the end of Robert Langdon’s journey in Florence – in the book, his next stop is Venice – just like us!

One thought on “Firenze: The Inferno Tour”