There once was a lady who lived in Taormina who was the “belle of the ball.” And I am completely fascinated by her.

Her name was Florence Trevelyan. She lived in Scotland in the late 1800s. The accounts I read say she wasn’t beautiful in a traditional sense, but was lively, unconventional, and thought women could do whatever they wanted – definitely ahead of her time.

Supposedly, she was a favorite of the Prince of Wales, who turned out to be King Edward VII. His mother was Queen Victoria and strongly disapproved – partly because Edward was already married. (It sounds like Edward was quite the womanizer, so Florence must have been extra special to him to get Queen Victoria all riled up.) The story goes that Queen Victoria “invited” Florence to leave England, even giving her money to travel the world. 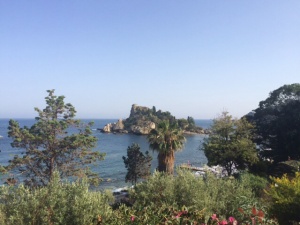 As she traveled around, Florence fell in love with Taormina.  She bought a little island right off the beach – Isola Bella – and built a house there. It is one of the most photographed spots in Taormina.

She also created beautiful gardens with pagodas and other unusual structures she called “Victorian Follies.” She used them to birdwatch and I think just to amuse people. She created a little cemetery there for her pets  where you can still visit their gravestones. Her gardens now are open to the public.  They are quiet and beautiful, albeit a little eccentric. 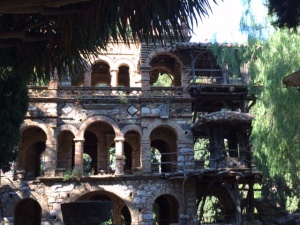 Florence ended up marrying the mayor and was the grand dame of Taormina. She funded artists such as Oscar Wilde and supported the village’s emerging gay community. Rumor has it that King Edward even visited her here – but only after his mother died.  By all accounts, she was beloved all over Taormina.

Today we visited Isola Bella. There is a cable car that goes down to the beach, and we set up camp at a beach club just opposite the pretty little island. (We just love how all the beaches here have a beach club where, for 10 Euro or less, you get a chair, an umbrella, access to a cafe, and even better – a restroom, right on the beach.)

The only way across to Isola Bella is to wade through at low tide. We lifted our skirts (at least me) and made our way in knee-deep ocean swells in order to pay tribute to Ms. Trevelyan. We could see her house up close and envision what it must have been like to live there – I guess she had to time her outings carefully! What a very fascinating lady! 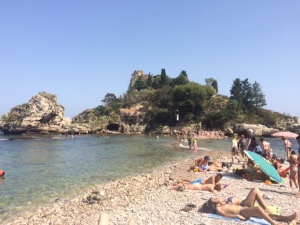 One thought on “Florence’s Taormina”