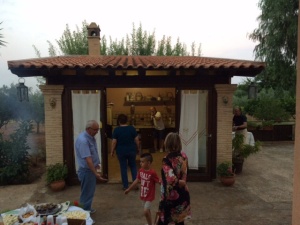 For our last night in Canicatti, another of Frank’s cousins, Emanuele, invited us to dinner. Since we had an early check-out the next morning and still had packing to do, Frank asked if we could make it a little earlier than usual – as these dinners typically start late around 9 and go all night. The family said sure – come at 6:30.

They instructed us to be outside of Savio and Cettina’s apartment at 6:30 (Salvio is one of Enza’s sons and the owner of our favorite dog, Kiko). We double-parked on the busy street, and they ran down with Kiko, and their cat, Gattina, so we could say a last good-bye.

Then they hopped in their car and beckoned us to follow – we thought to our early dinner. But instead, they stopped at a gelato shop, where Enza was sitting out waiting. We parked and joined her. Salvio ordered gelso gelato for the table, which was made with fresh mulberries and amazing. But Frank and I were puzzled – why were we having gelato when we were supposed to be at dinner?

Soon, Johnny and Monica (Enza’s other son and wife) joined us for gelato. We were happy to see them so we could say one last good-bye to them also. Then, through Google translate, they asked if we’d like to see their apartment. We said of course. So – off we drove for a grand tour. Their apartment really is spectacular – two floors and perfectly decorated overlooking hills that remind me of Tuscany.

By this time it was around 8:30, so Enza declared it was finally time to go to Emanuele’s for dinner. I think something had been lost in translation and the family thought, “We have no idea why Frank wants to come early for dinner, but we’ll do our best to entertain him!”

So – at about 9 pm, we pulled into Emanuele’s country villa, which is a huge house set in an olive grove. This final dinner was reserved for Frank’s first cousins – Enza, Emanuele, and Franco. They are brothers and sister, and it was their father who accompanied Frank’s mother to Naples to board the ship that took her to America. So all of them had heard stories of the others through the years and kept in contact. Rosario was there, too, whose wife was another first cousin (she passed away a few years ago). So the whole gang was together again.

We started with apperitivo in the garden while everyone gossipped, drank wine, and the men grilled sausages. 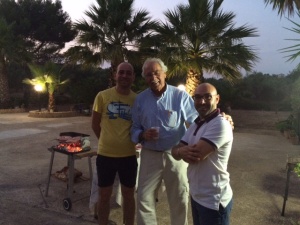 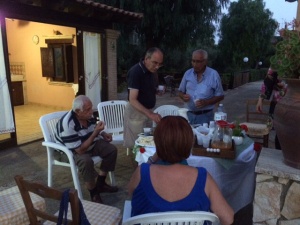 Then we moved to a long table on the terrace for a delicious dinner with much story-telling and laughter.

At the end, Mirella (Enza’s daughter) showed up with (more) gelato, so we could say good-bye to her, too. She has been one of my favorites, and both of us got teary-eyed knowing it was our last night. Enza sat by me and kept reaching over and squeezing my hand. Frank and I both kept looking around trying to memorize each person. Soon, it was time to say good-bye to everyone. There was much hugging, tears, smiles, hopes of visiting America, and promises to return soon to Sicily. (I also gained several new Italian Facebook friends.)

It is hard to express how special this place has been to both of us. Frank’s family has been welcoming, gracious, warm, and loving. It has been fun to see him re-connect with them and hear stories of his grandparents and parents, some for the first time. I could just picture Anoinetta, Frank’s mother who started all this with her sail to America at the age of 19, looking down from the stars and smiling. Sicily, you are in our hearts now, and we will be back.

One thought on “Canicatti Finale”