Yesterday we visited my very favorite island in the Venetian Lagoon – Torcello. And one of my favorite restaurants in the world – Locanda Cipriani.

I have been transfixed by this island ever since my parents and I encountered it when we rented a houseboat for a trip around Venice. We were new at barging and the light was fading.  We panicked and got permission to tie up to the water taxi stop on Torcello – an island we had never heard of.  We were just thankful to be tied up somewhere – even if in the middle of nowhere.

My dad did a scouting mission and reported a number of restaurants so all seemed ok. Well, all the tourists left – and it turns out only about a dozen people actually live on Torcello – along with about 100 cats.  We ventured in to look for dinner, and every restaurant was closed.  We saw a light at a place called Locanda Cipriani and knocked on the door, but they turned us away because they had a private party (complete with a security detail).  They seemed shocked we were there.

We wandered around the churchyard looking at artifacts scattered about, including an unusual looking seat. It was a spooky place.

Soon we were driven back to the boat by more mosquitoes than we had ever seen.

Back on the boat, we read that this island had once prospered but the residents were driven out by malaria-carrying mosquitoes (yikes) – AND that the unusual chair we had seen in the churchyard was actually the throne of Attila the Hun. We spent a nervous night as the only boat tied up to the water taxi stop and were very relieved at first light. 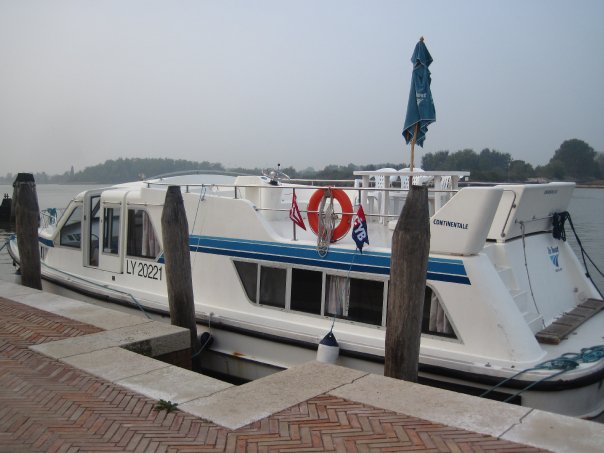 But Torcello – with its mystery and loneliness – had captured my imagination.

So – on my next trip (a few years ago, now with Frank in tow) – I wanted to visit Torcello in the daytime. We took one vaparetto after the other to travel the 45 minutes to this most outer island.  And it was as mysterious and special as I remembered.

There is a very simple church there that dates to the 7th century with amazing mosaics – and hardly anyone is there.  It is the most moving church I have visited in Europe – partly due to its silent setting.

We came back the week of our wedding to visit again. And again yesterday.  Each time it captures me all over again.

And it doesn’t hurt that my favorite restaurant in Venice is there, too. When Frank and I returned, I once again knocked on the door of Locanda Cipriani – this time with a reservation.  They welcomed us with open arms and with the best pasta dish I have ever had (I have even dreamed about it) – green taglionini with prosciutto and béchamel sauce, baked and served au gratin.

The Locanda is a low-key inn with 5 rooms and a world-class restaurant. It has hosted the Queen Mother, Queen Elizabeth II, Princess Diana and countless movie stars looking to get away from it all.  Ernest Hemingway lived in one of the rooms for awhile writing.  It is a fascinating spot.

In summer, lunch is served in their beautiful gardens.

The owners also own Harry’s Bar – much more touristy – but those truly in the know make the extra effort to travel to Torcello. A secret spot in the lagoon with a little mystery thrown in. 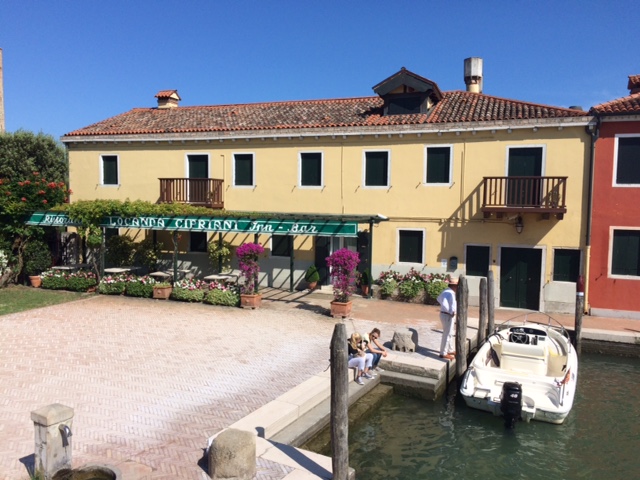 2 thoughts on “My Favorite Island – Torcello”