Our little village of Hopkins is the home to the Garifuna people – and tonight we got to share some of their culture.

They have a very interesting history. In 1635, two slave ships from Nigeria shipwrecked off of St. Vincent in the Caribbean.  They integrated with the people there and became known as Black Caribs.  England had its eye on St. Vincent and tried to force them out, to no avail, for over a hundred years.  The Garifuna were aided by the French, but finally the English won.  They hunted down the Garifuna, destroying their homes, killing many, and deporting the survivors eventually to Roatan, an island off of Honduras.

A few years later, the Spanish took over Roatan and sent 150 Garifuna men to Belize as laborers.  A mass migration of the remaining Garifuna from the Honduran Island to the area surrounding Hopkins, Belize occurred in 1832, known as Garifuna Settlement Day.

The Garifuna are now recognized as one of the primary ethnic groups in Belize, along with Mayan and believe it or not, Amish (more on that later). The United Nations recognized them as a World Heritage Culture in 2002.

They have worked hard to maintain their culture and pass down their religion, language, customs, and music – similar to the Gullah in South Carolina.  Most actually speak Garifuna as a first language.

They are famous for telling stories through drumming and have a drumming center in Hopkins. Their drums are locally made of mahogany or mayflower wood.

We were lucky enough to see them at dinner last night. What a special chance to share a bit of their history. 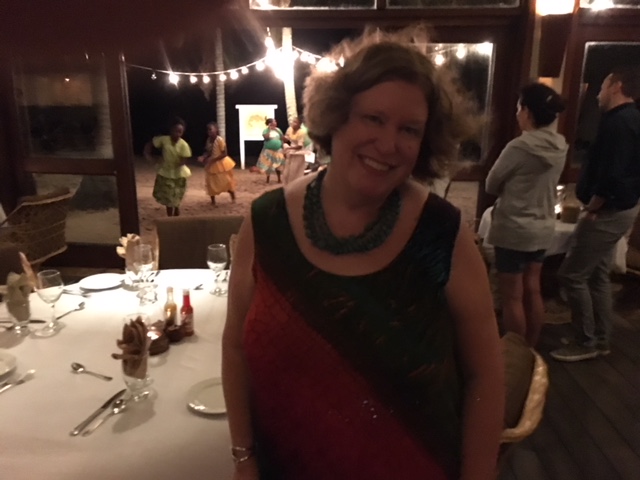 (By the way, the dinner was at the Jaguar Reef Resort, which has an excellent dining room overlooking the ocean – Franks says the best pasta so far this trip!)