This has been our most adventurous day yet. This post is a little long because so much happened. To catch you up, we are trying to secure the Italian version of a marriage license – a Nulla Osta – so we can elope in Italy (see our last blog for more details). Our instructions from our wedding consultant were to travel to Naples, meet someone named “Mr. Bruno” (Bruno is his first name), pay him some money, and go with him to the US Consulate and Italian Court. We got up early and were ready.

We were to meet Mr. Bruno at 7:45 in front of the US Consulate. Our taxi dropped us at the steps and there was no mistaking it – big US flag, barriers, bars, and lots of guards with facemasks and guns. We timidly explained we were to meet a man named Mr. Bruno and trying to get our marriage license. The guard (who was Italian) said, “Ah, Mr. Bruno – wait here.” We were expecting an Italian lawyer in a suit, so figured we’d recognize him. But a few minutes later, up strolled a man in all leather holding a motorcycle helmet – Mr. Bruno (who, by the way is fantastic, and if I ever get in trouble in Italy I am calling!). 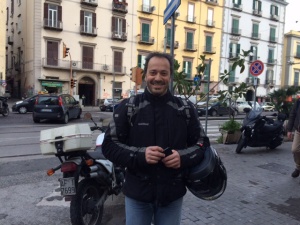 Mr. Bruno said we were to go inside by ourselves – he could not join us – and meet him after. We got waved through security after surrendering our phones, iPad, and Kindles, and were directed to Window 6 on the second floor. There were no people in sight, so we went up the stairs, but no Window 6. We finally remembered that the second floor in Italy is really the third (they do not count the ground floor) and found Window 6.

There were a few other people seeking visas, but we were the only Americans. They man behind the window called us up over a loudspeaker (even though there were only 4 people in the room) and said gruffly, “Well, what do YOU want?”, to which we stammered about trying to elope in Italy. It was like the Cowardly Lion trying to talk to the Wizard of Oz to ask for courage. He had us fill out some forms where we had to list our place of birth, parent’s names, and other identifying information. We had to wait and wait and then another man called us up. He was behind a window and spoke through a microphone and questioned us about our intentions. Then we had to swear under oath that we were legally able to be married and were entering into this union voluntarily. With that, he stamped our Nulla Osta document, and we were legal – at least in the US.

Back outside, we met Mr. Bruno, who said our next step was to register the Nulla Osta at the Italian court. Since he was on a motorcycle, he found a taxi for us and gave the driver the address of the Tribunale (courthouse). He said he had to stop off at the police station to have our forms stamped. He said later it was for the police to confirm that our signatures were valid with the ones “on file” – we aren’t even sure what that means but figured we wouldn’t ask (this may be the part that was not all above-board).

We arrived at the Tribunale, which is the central courthouse for any legal business in Naples. It is huge and surrounded by the jail – needless to say, the neighborhood is a little seedy (see pictures above). There was a long line to get in, consisting of all walks of life. We were still by ourselves but managed to get in line and talk our way inside and through security. Once inside, I was amazed that the courthouse had a full bar inside, which was packed, it looked like by all the lawyers! (Mr. Bruno said this is where deals really are negotiated.)

Mr. Bruno met us and whisked us to the 16th floor for family court matters. Waiting for us was a man he introduced as “my friend Marco – he works in this building.” We weren’t sure why Marco was there – I thought maybe holding our place in line.

We waited awhile and eventually Bruno explained that two witnesses are required to testify that they know both me and Frank and that we are legally able to marry. Apparently Marco was our second witness – with Bruno being the first. Since we actually never had seen either one of them until today, they asked us to write down all of our important information in capital letters so they could keep it straight. (Bruno added, “Don’t worry, it’s not illegal.”)

Eventually, we got called in to an office where someone who seemed to be a magistrate of some sort reviewed the documents, interviewed our witnesses, entered our information, and placed a lot of stamps on our papers. Bruno and Marco looked a little nervous, like maybe we’d all be caught out. We just kept quiet. And then, with one final stamp, we were free to go.

Now the papers have to be officially recorded. So we go back to the courthouse tomorrow to pick them up – our new friend Marco is supposed to meet us outside with them, and we can jump out of the taxi and grab them. We have no way to reach Marco and don’t even know his last name, so we shall see . . . .

After all that we were so wiped out that we opted to skip sightseeing and just wander around the back streets of Naples. The day before, we were completely intimidated by the chaos of the city, but after our courthouse experience, it all seemed much tamer.

Naples is known for its pizza, so we asked our taxi driver to recommend a place. In Italian, he told us about Pizzeria al Due Due (22) – “the best pizza in Naples.” He said it was on a piazza “about mezza kilo” (half a kilometer) away. We knew we’d never figure that out, so just took a long walk down via Toledo, the main drag. Then we got braver and branched out to side streets, where the real action was – fish markets, little stalls with customers and shopkeepers yelling at each other, and scooters that would shoot past, even on the sidewalk.

Finally, I spied what looked like the perfect pizza place – and guess what? It turned out to be Pizzeria al 22! They have been serving Neapolitan pizza since 1935. Our taxi driver was right – it was the best pizza I’d ever had.

So fingers crossed tomorrow goes as planned and we pick up our papers on time – and then train back home to Florence. We feel like we’re on an Amazing Race-style Treasure Hunt, with the prize at the end being a wedding. What a romantic adventure!