Well, when I last wrote, we were in Naples and waiting to see if our Italian marriage license was going to be officially accepted so that Frank and I could elope. The last step in this process was to swing by the Naples courthouse on our way out of town and pick up the filed copy, which our new friend Marco was supposed to bring out.

Our Rendezvous with Marcus

We jumped in a cab at our hotel and tried to explain that we needed to go to the courthouse, but to leave the meter running because we’d be going straight to the train station. The driver said, “Va Bene” (OK) and sped off. We got there and Frank hopped out to look for Marco. I stayed with the luggage.

The driver looked a little nervous then – I guess it did look a little suspicious that we were picking up a “package” at the courthouse and had our get-away car ready and waiting. So I tried to explain we were getting married and that’s why we were there. He didn’t understand English, and my Italian does not extend to these kinds of situations, so I just hummed “Dum, dum, dum, dum – here comes the bride.” And he smiled and said, “Ahh” and looked very relieved.

But soon Frank came charging back with our freshly stamped paperwork and we were off the Napoli Centrale station. Victory! We took the train back to Florence and were happy to see our little apartment. 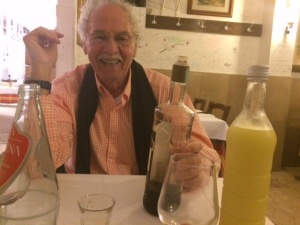 Today we were back to sightseeing. But first – lunch. I read in a couple of guidebooks about Trattoria Tito. It is way off the beaten path, so we trudged several blocks out of the tourist area before we found it. When we did, we weren’t so sure because it looked very small, a little run-down, and closed. But there were people out front, who told us that it would open soon. Apparently it is so good that the Italians line up before it even opens! Since we were there at the opening, we got a table without having a reservation.

There is a sign on the door that says, “No well done meat here.” And the menu adds, “And no cappuccino!” (since that is only for breakfast in Italy). It is a very lively place where you eat what you are given, and it is delicious. There is graffiti on the walls, and the only language you hear is Italian – no Americans here. At the end of the meal, they plopped down two plastic soda bottles- one full of grappa, the other homemade limoncello. You serve yourself however much you want. (We have already made reservations to go back later this week!)

Another Church with a Hidden Surprise: San Lorenzo

Back in full Florentine mode, we visited another church, but this one was one of the most special due to its facade. As you can see (above), it is very plain and not very attractive. This is San Lorenzo church, which is in our neighborhood and where the Medici Family worshipped and Cosimo the Elder, who started the Medici dynasty, is buried. Michelangelo had designed an exterior, but the Pope nixed it due to money problems and it was never completed. So many people pass it by.

But if you venture in, it is beautiful inside. Brunelleschi, who designed the Duomo across from us, also designed this church, and Donatello designed the pulpits. There is a dome in the sacristy that Brunelleschi painted to reflect the exact star pattern from July 4, 1442 (see below) – there are many theories, but no one today knows why that date was so important.

My favorite thing to do when I visit these churches is to light a candle. Usually there are several places where candles are set up, and you can light one for a small offering. I wait until I see the perfect chapel within the church that inspires me, then light my candle, and sit down and pray – for our journey, for our marriage-to-be, and for our families. I just love the thought that I have candles burning with prayers all over town.

We were so inspired by this church that we went back today for Sunday services. It was even more meaningful when full of fellow worshipers, music, and all the rituals of Mass. While the service was in Italian, we were able to follow along for most parts. I learned that “peace” is “pace” (pronounced pa-chee) – what you say when you shake hands. And “Thanks be to God” is “Rendiamo grazie a Dio.” (I did completely miss the Lord’s Prayer, which Frank says we recited, so I will have to work on that for next time.) We sat next to an Italian lady, who told us as we left, “Buona Domenica” – “Happy Sunday.” So I say to you – “Buona Domenica!”

One thought on “Back in Town: Napoli to Firenze”