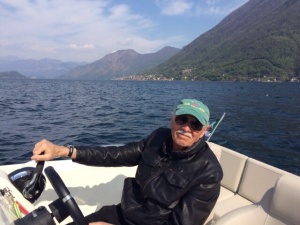 We had our most amazing day yet (I know I keep saying that) – but we love the water, and even more – we love being on a boat on the water. So we rented a small motorboat so that we could explore the lake on our own. So much fun! We had visited the boat rental place a few times to get the lay of the land and struck up a friendship with the owner, Mateo, who it turns out is a former World Champion Formula 1 speedboat racer. We saw all his trophies. Frank, especially, was very impressed. Now he’s the owner of the boat base and also a mechanic on the Formula 1 circuit, which takes him all over the globe. 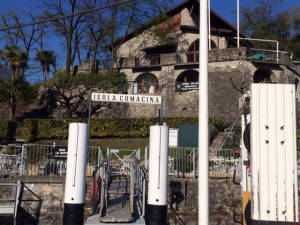 We zipped around and studied some very impressive villas from the water, but our destination was Isola Comacina. The little island was settled in Roman times and an important ally of Milan in fighting off its then enemy of Como. The island also was a haven for Christians. But in 1169, Como conquered the island, burning all the churches, and causing its inhabitants to flee. It is said that a poet of Como put a curse on the island, and it was left uninhabited until the 20th century. It passed through Belgium rule and back to Italy and is now an artists’ retreat, nature preserve, and the setting of what the guidebooks call a “very exclusive” restaurant.

We had heard that, in season, the restaurant is packed with celebrities – their pictures are all over the walls – movie stars, rock stars, and world leaders. You must have a reservation to dine there – and obviously, must arrive by boat. There is a little ferry, but we thought it would be much more fun to arrive on our own. There is a rustic jetty behind the restaurant where we saw fancy wooden water taxis pull up, probably bringing their very wealthy guests. And so we rode right up with them in our motorboat with “Rent A Boat” painted in big letters on the side. But we thankfully don’t let that type of thing get to us and docked perfectly – whew!

And lunch was fabulous. It was served on the terrace overlooking the lake hosted by the owner, who is quite a character. They have had the same menu there – a set meal served family style – since 1947. Vegetables, lake fish, fried chicken, salad, cheese (which the owner cuts out of a huge wheel and serves at knifepoint), blood oranges and ice cream. But the highlight – the flaming coffee. At the end of every meal, the owner rings a bell and mixes up his magic potion, telling the story of the siege of the island by Como and how this flaming coffee will ward off the curse that has existed for over 800 years. The coffee actually has sugar and brandy, which makes it flame. I’m usually a tea drinker, but even I tried it. A very cool experience. 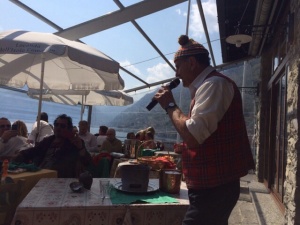 After lunch, we cast off our lines, slowly motored back to Argengo, and vowed to remember this magical moment and captivating place. 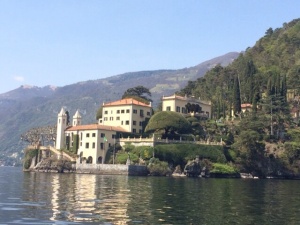 One thought on “Voyage to Isola Comacina”