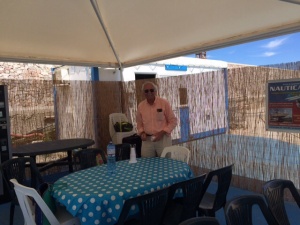 We are embarking on our biggest adventure yet – renting a sailboat in Sicily!

Frank and I hatched this plan over a year ago and started researching charter companies. We met a group – Kiriacoulis Yacht Charters – at the Annapolis boat show that had a few boats in Sicily and seemed just what we wanted. We chose a 40-foot Bavaria cruiser, which actually was one of their smaller boats. We knew it could be a bit of a challenge – Carolina Girl is 33 feet – but felt like we could handle if we talked through everything , even the tricky Mediterranean Mooring, where you back in to the dock with literally an inch between you and the boat next to you (more on that in the next blog).

We ditched the rental car (whew) and hired a car service to take us to the boat base. The driver, who takes Americans all over Sicily, had never taken anyone to Porto Sant’Agata di Militello. We drove around a little before spying masts in the distance. We then nervously drove out onto a concrete pier lined with fishing boats (some looking a little derelict). There was a barricade with white tents beyond it and a mobile home-office. Frank got out to check and confirmed this was the place. Our driver looked a little worried about leaving us there, but I told her we would call if there was a problem.

We pulled our luggage through the barricade and under the tent (which had the bathhouse next to it, consisting of 2 port-o-potties). But the people were very nice. Frank and his wife Enrica help run the base and were welcoming and gracious. 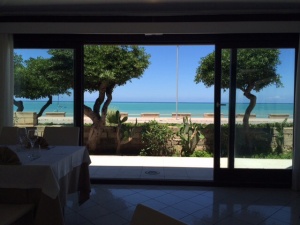 Our boat wasn’t ready, so they arranged a local restaurant to pick us up for lunch – Pino’s. Soon a black Alfa Romeo drove down the long concrete pier, picked us up, and brought us to a chic restaurant right on the water. Pino himself said he would take care of us and brought out dish after dish of fresh fish, with an Asian flair. It was absolutely delicious. This was followed by a creamy lemon sorbet to cleanse our palates – it was so good that I suspect it may have contained a little limoncello as well.

Back at the Boat Base

When we returned to the boat base, we had been joined by a large group of Polish men also waiting for their boats – 18 of them on two catamarans. (You really can’t make these stories up.) We learned that the group has sailed together all over the world on their annual “guy’s weekend.” They were all ages and included (if we understood correctly) Poland’s Supreme Court Chief Justice and Attorney General, several lawyers, and a few doctors, one of whom is required to travel with the Chief Justice. They were a very merry bunch.

Finally, we boarded our boat and are getting checked out and provisioned. Thankfully, I had ordered water, wine, beer, bread, cheese, fruit, and a few supplies ahead of time because there is NO market (or anything else) nearby. So we will have to make do until we get somewhere to replenish.

So our adventure has begun! Next stop: The Island of Lipari 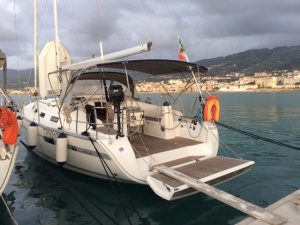 One thought on “Sailing in Sicily”