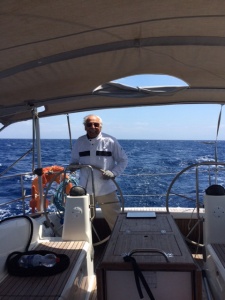 Today was our first sail in Sicily. Our destination was the Island of Lipari, one of the Aeolian Islands off the Northeast coast of Sicily – about 30 nautical miles from the boat base, partly in open water.

We had seen a windy weather forecast early in the week, but the revised forecast had the winds more manageable. So we set out and immediately noticed lumpy seas of about 3 feet. OK – we could handle. Then the seas built a little more – 5 feet. Not as fun, but still ok. Soon, we were in 6-8 feet waves with the wind climbing to the lower 20s. We were experiencing the famous “Aeolian Triangle.” There really is such a thing – apparently the weather here is notorious for being wrong and wind comes out of nowhere. After all – these islands are named for Aeolus – the God of Winds, who was first recorded in Homer’s Odyssey for giving Odysseus the contrary winds tied up in a bag. Odysseus’ curious crew opened the bag, which released the winds and blew their boat off course.

Well, we hunkered down and plowed through. We put up a tiny bit of mainsail to try to steady ourselves and both felt a little seasick at times (which has never happened). We munched on rice cakes and apples.

Eventually we made our way to the lee of the Island of Vulcano to get away from the swells, but then had to turn north directly into the wind, which at this time was gusting to 30. Later, we read a (non-sailing) guidebook that said “seeing Vulcano by boat is both dramatic and exhilarating.” We certainly agree! (The pictures of Frank above and below are around Vulcano.) 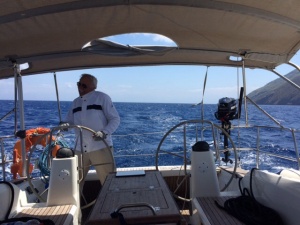 But eventually we spied our destination – yay! We called the marina who sent a guy out in a pushboat to greet us and lead us in – whew.

In Europe, they do not have pilings or finger piers. Instead, boats back up to the dock or quay and either drop an anchor or pick up a “laid line” for the bow that is connected to the sea floor and then secure stern lines to the dock. That way the boats end up “cheek to cheek” with only their fenders between them. There is not a lot of room for error. We have done this many times while sailing with groups, but this would be our first time by ourselves. It is a lot to handle with just 2 so we were a little nervous.

I was at the helm. The first challenge is backing in. Carolina Girl is a dream to back, but this was a new boat that was much heavier – and in big winds. I flipped her around and started backing toward the slip. The pushboat helped a little, but I managed to get in straight, right next to a boat with two people onboard worriedly holding fenders for us. But we were fine and never came close to touching. I threw my first stern line, while Frank grabbed the laid line from the dock and hurried to the bow to secure it. Then we did the same with the second line. We made it! 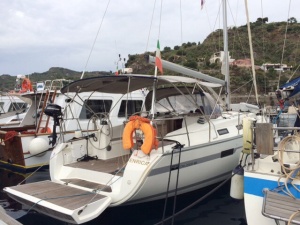 We took stock of our surroundings. We are in a very sheltered spot – Porto Pignataro – about a half-mile from the main town of Lipari. There is a bus that runs every 15 minutes, or it’s a nice walk along the sea. There is no bathhouse, but there is a bar literally on the rocks by the water. We are happy and too tired to care. And there are lots of folks like us – sailors from all over the world to trade stories with about that infamous Aeolian Triangle. We feel right at home. 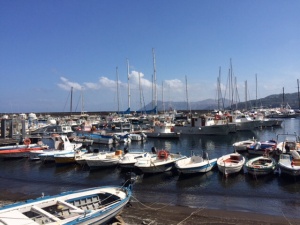 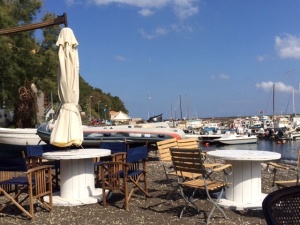 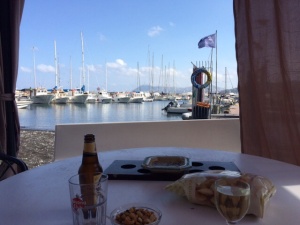 2 thoughts on “Onward to Lipari”