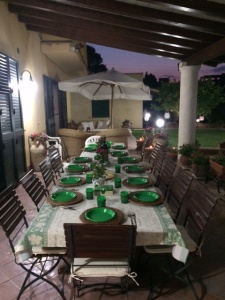 So the whole Volpe gang is here from the USA – Frank’s son, John, his wife Valerie, and their two daughters, Cecelia (age 10) and Samantha (age 7).

We had a pretty long day on our roadtrip from Taormina to San Leone, but we still had our family welcome dinner, set for 8:30 pm. (They eat much later in Italy.) So our little Jeep caravan headed up to Canicatti, where all of Frank’s mother’s family still live.

Our destination was the “casa di campanga” – country villa – of one of Frank’s cousins. Every family that we know here seems to have an apartment in town and a villa in the country, usually only about 5 miles outside of town. The apartments typically don’t look very fancy on the outside (I think so no one breaks in), but once you enter, they are huge – whole floors and sometimes 2 or 3 – with only the best furnishings and perfectly decorated. The country homes pass down from generation to generation but usually are set on lots of land, like an olive grove, with big houses with terraces, gardens, and very good views, like Tuscany. The one for this dinner even had a big swimming pool.

For Frank and me, it was a big reunion of the family we had seen earlier in our trip. For John, Valerie, CeCe, and Sam, there were lots of introductions. The family brought out plate after plate of Sicilian favorites. CeCe and Sam were game to try several of the dishes and said “non grazie” very sweetly if they didn’t want something, which impressed everyone. CeCe found a new friend (maybe even a crush) among the other kids – Gabriele is 11, and he and CeCe discovered a shared interest in soccer.  They spent part of dinner counting to 100 together, first in Italian and then in English.   After supper, the girls even performed a dance routine for everyone to much applause.

And one of the highlights of the evening for me and Frank – we were reunited with our favorite dog, Kiko! If you read the blog earlier, Frank’s cousin, Enza, Frank, and I took a roadtrip to visit more cousins in Siracusa. One night at their home way out in the country, a teeny little dog scampered up. After searching, it was determined that someone must have dropped him off. Enza, who is quite a character, decided to keep him and give him as a “surpriso” to her son, Salvio. Frank and I tried to talk her out of it – or at least into asking Salvio first – but she said, “No – surpriso!” For various reasons, our trip home was very long, so I sat in the backseat with tiny little Kiko in my arms for nearly 9 hours. Here are some photos from that trip (see Kiko in Enza’s purse?):

As you can imagine, Salvio was pretty surprised and not too pleased to be the new owner of a puppy. But I am happy to report that Kiko has won him over and settled into his new family very nicely. I think Kiko still remembered us – he greeted us with lots of kisses. 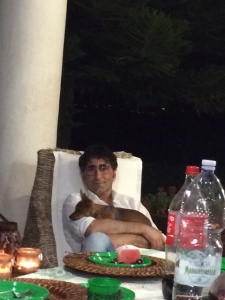 We will be here all week, with more family visits in store. So stay tuned . . . .